AUSTIN — Today Land Office Commissioner George P. Bush reflected on 'A Year of Recovery' since Hurricane Harvey hit Texas, causing damage and devastation across more than 40,000 miles of Texas. The Texas General Land Office (GLO) was tapped on Sept. 14, 2017, to be the first state agency in history to partner with the Federal Emergency Management Agency (FEMA) on the short-term housing assistance mission. One of the reasons for the designation is the GLO's proven track record for effective administration of Community Development Block Grant for Disaster Recovery (CDBG-DR) funds from U.S. Housing and Urban Development (HUD) for long-term recovery.

"At the GLO, we were honored to be designated, for the first time in Texas history, the first state agency to partner with FEMA on the short-term housing mission to help Texans get back on their feet," said Commissioner Bush. "What I witnessed in the response was Texans helping Texans, caring for one another and proving that not even the worst natural disaster in our state's history, can stop us. Hurricane Harvey disrupted the lives and livelihoods of millions of our coastal neighbors, but Texans are strong, and we have come together in a historic fashion to help one another. We continue to bounce back stronger than ever." 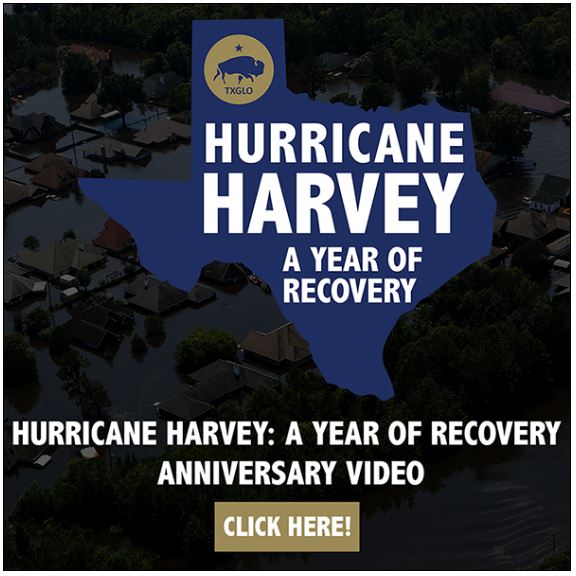 The Texas General Land Office was tapped three weeks after Hurricane Harvey made landfall to be the first Texas state agency to partner with the Federal Emergency Management Agency (FEMA) on the short-term direct housing mission to help those affected get on the road to long-term recovery. Through the historic partnership, 3,486 families - more than 10,000 people - were housed in manufactured housing units, travel trailers or through direct lease while an addition 16,195 homes received basic repairs allowing an additional 50,000 or so Texans to live at home while continuing to work towards full recovery. The GLO's partnership with FEMA following Hurricane Harvey represents the first time in Texas history that any form of repairs was offered as part of the short-term disaster housing assistance mission.

"By expanding mortgage relief and including more options to help those struggling to meet their monthly payments, it takes the pressure off and helps folks focus on recovery while regaining a sense of normalcy," said Commissioner Bush. 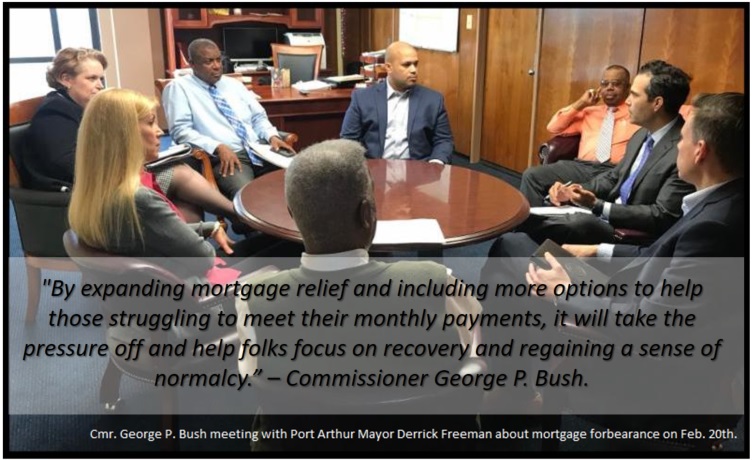 Commissioner Bush and the GLO team have also been working since landfall to push forward Community Development Block Grant for Disaster Recovery funding from HUD.  On August 17, 2018, Secretary Ben Carson signed the final grant agreement officially authorizing the Texas General Land Office (GLO) to begin spending $5.024 billion allocated for long-term housing assistance to help Texans recovering from Hurricane Harvey. The State Action Plan for the allocation of housing assistance funds was approved June 25, 2018. The grant agreement is the final step required before the GLO can access the funds for reimbursement for programs outlined in the State Action Plan.

"Disaster recovery requires long-term commitment to helping communities rebuild," said Commissioner Bush. "HUD's signing of the grant agreement is the final step in enabling the GLO to move forward with our detailed plans for helping communities across the Texas coast recover from Hurricane Harvey. We remain committed to getting this funding out to communities as quickly as possible in order to bring folks home."

The GLO has already committed more than $100 million of the $250 million set aside for the Multi-Family Affordable Rental Property Program. To date the GLO has moved forward on awards for 26 affordable rental rehabilitation projects in several communities including Rockport, Port Arthur, Orange, Victoria, Beaumont, Sweeny, New Waverly and Bay City. Currently obligated projects will repair more than 1,400 rental homes. The application process is ongoing and will continue until the funding is fully obligated. An additional $57.8 million in CDBG-DR funding held back by HUD from previous allocations was released at the request of Commissioner Bush in the days following Hurricane Harvey. These funds have been awarded by the GLO for buyouts and acquisitions of repeatedly flooded homes in Harris county as well as workforce housing in the Coastal Bend. Additional affordable housing in Southeast Texas Governor Greg Abbott.

In the immediate aftermath of Hurricane Harvey, the GLO also joined forces with the U.S. Coast Guard to remove damaged vessels sunken in coastal waters. Together the GLO and Coast Guard targeted 679 damaged, sunken or displaced boats for removal and prevented about 58,815 gallons of oil and hazardous chemicals from spilling into Texas coastal waters.

"At the GLO, our greatest priority has been and continues to be helping our fellow Texans recover from Hurricane Harvey," said Commissioner Bush. "Removing displaced and sunken vessels from our waterways helps restore our maritime commerce and keep folks safe. Helping owners find and identify their boats was also an important step toward recovery. Work like this is an important part of the story of this disaster and our subsequent recovery." 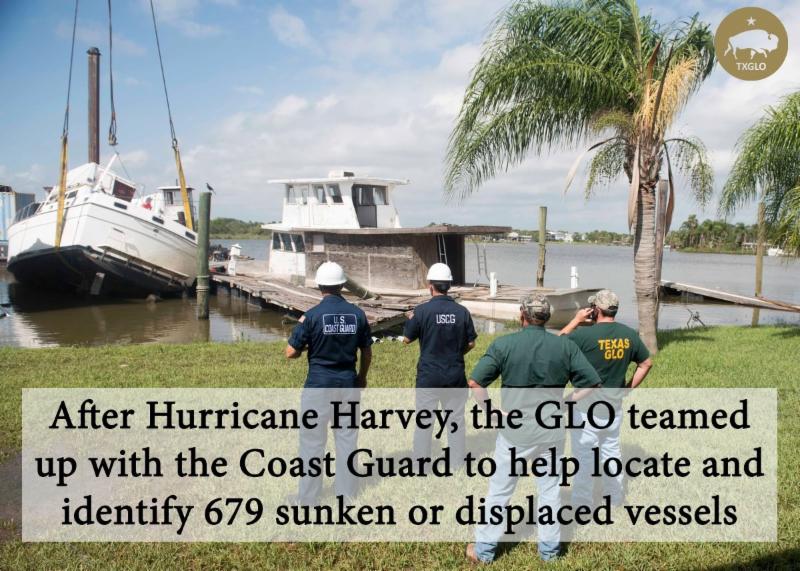