AUSTIN — The Texas General Land Office (GLO) was recently awarded first-place honors by the National Association of Government Communicators (NAGC) for its natural disaster preparedness public service announcement campaign, Don’t Ignore Your Risk. The NGCA’s Blue Pencil & Gold Screen Awards are an annual international awards program that recognizes superior government communication products and those who produce them.   “This digital ad campaign is garnering national-level attention and playing a critical role raising awareness so that Texans can better prepare for disaster before it strikes,” said Texas Land Commissioner George P. Bush. “Don’t Ignore Your Risk coincides with the start of hurricane season while emergency preparedness is at the top of our minds, and I am incredibly proud of our team’s efforts to produce this award-winning digital public service announcement.” 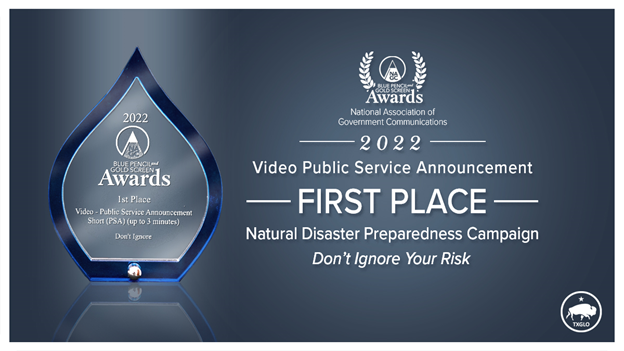 The Blue Pencil and Gold Screen Awards recognize excellence in government communication at all levels of government across the nation. Listed as one of the 21 most coveted government leadership awards, the Blue Pencil and Gold Screen awards program has 51 categories in which communicators can submit work, reflecting the breadth of tactics employed by government communicators to deliver information to the public.   "We are proud to recognize the excellent work that these award winners provided to their communities in 2021. There were so many compelling, creative and informative products submitted this year," said NAGC President Scott Thomsen. "As government communicators, we believe that every citizen has a right to equal, full, understandable, and timely facts about the activities, policies and people of the agencies comprising their government, and the example set by these government communicators is one we should all follow."   Don’t Ignore Your Risk will run during the 2022 Atlantic hurricane season, June 1 through November 30. The public service announcement is a bilingual multi-media, multi-platform campaign urging Texans to take time now to know their risk, purchase flood insurance, protect their home, safeguard documents, and prepare emergency supplies and an evacuation route.   Established in 1976, the NAGC is the only not-for-profit association dedicated to advocating, promoting, and recognizing excellence in government communication. NAGC provides world-class communication training to its members and non-member government communicators through its annual Communications School and monthly professional development opportunities. To learn more about NAGC, visit NAGC.com.